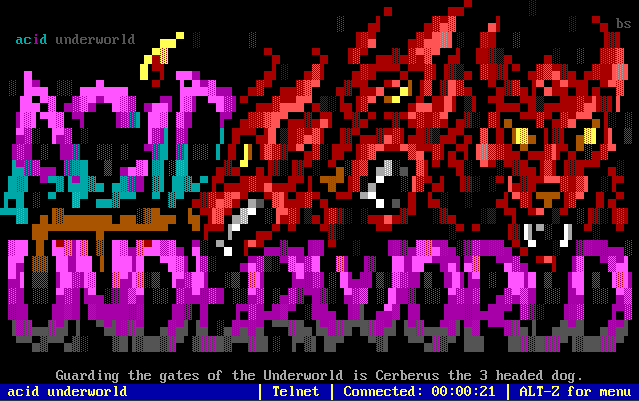 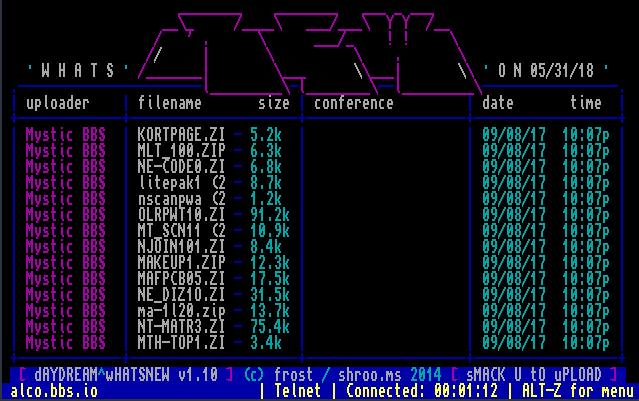 the warez scene lead the way with .NFO files and FILE_ID.DIZ, these where text files accompanying the release describing them as well as the group (and often board) providing them. these files will adorned with the early scene ASCII art. but in this age, the terminal programs you used to call the boards utilized the ANSI character set. a larger set of 256 character inherited from IMB's CP437, it also contained special ANSI escape sequences that allowed for color text with the 16 foreground and 8 background colors provided by your shell. forward thinking ASCII artists used this power to create colorful works of art to adorn the BBS.

the scene pushed forward, and the people creating this art banded together and formed art collectives (or "crews") where they released their work in "artpacks". eventually these groups moved beyond BBS ad/screens/art and starting creating "art for art's sake". the height of this scene (strictly according to the number of packs released at that time) was 1997, with over 800 packs being released that year alone. 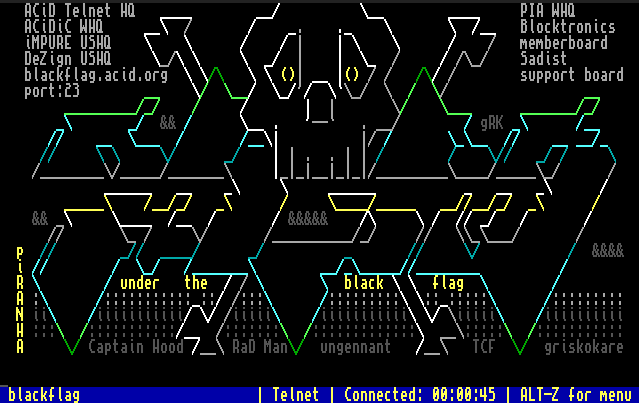 when it comes to the textmode scene, there were generally two groups based around hardware: the pc scene and the amiga scene. the amiga scene revolved around the commodore amiga. their releases are often seen more as "ascii art" since they were without color, and featured a number of different ANSI fonts. the most notable being topaz. most amiga ansi was created to accompany warez scene releases, so they were often not seen outside the underground. so members of the amiga crews would release "collys", which are a collection of works usually by a single artist. over time, the amiga scene has continued on using modern versions of their classic fonts and adding PC style colors to their work. while the PC scene still had heavy ties to the warez scene, many of the groups focused on BBS art and advertisements. because of the standard terminal size of 80 characters and a weird bug that corrupted the buffer if the last column was used, all ANSI art from this time period adhered to a strict 79col rule. 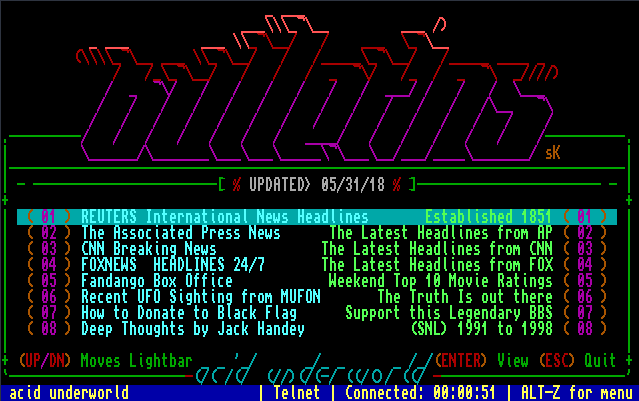 around this time, the modern internet was born. people began connecting to dial-up isp's to reach larger networks as apposed to dialing up individual computers. this pushed the BBS scene further underground than before. eventually, a new BBS standard was adopted allowing for these legacy systems to be reborn and reached once again via telnet (and eventually ssh). and that's where we are today. 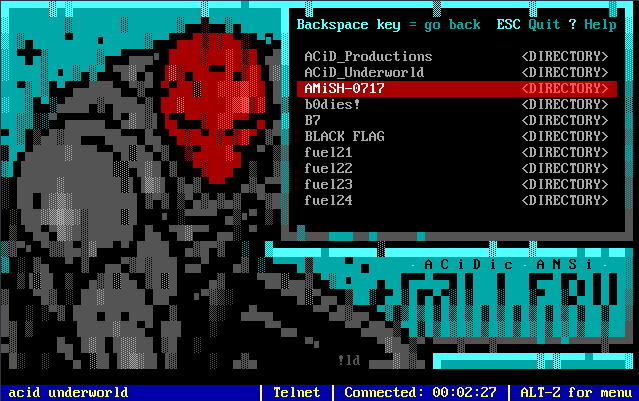 while it's technically possible to use a standard unix {,like} terminal to connect to a modern bbs, it's better to use a tool specifically designed for BBS'ing. my personal tool of choice is syncterm. it runs on linux, {open,free,net}bsd, osx, and windows. it supports all connection methods including telnet, rlogin, ssh, RAW, zmodem, shell, and direct serial connections. it boasts copy/paste features along with username/password saving and auto-completion. and it's biggest feature, is support for automatically setting and switching between multiple SCENE FONTS!

ansi art uses a meta data format called "SAUCE", developed by the legends of ACiD productions. the sauce file, among other things, contains info about what font the art should be rendered in. this allows the sysops to use both PC and AMiGA style artwork on their boards and let's your client decided how to correctly render it.

while there are not nearly as many active boards today as there were back then, most of the ones that are still around are super high quality. containing custom artwork, door games, live chat, and cross-board communications.

my friend grisk of impure released this list of awesome active bbs' as of 2016. but i'll highlight some of my personal favorites:

since this is by and large and underground scene, it's historically been quite exclusive and difficult for people to "see". but with the thankless help of internet hoarders, there are now multiple textmode preservation networks. some simply offer direct download links, while others offer interactive galleries to view these works of art. i'd like to take a moment and thank maze for all his hard work on textmod.es. it's an amazing site hosting the artwork of multiple generations of scenesters. 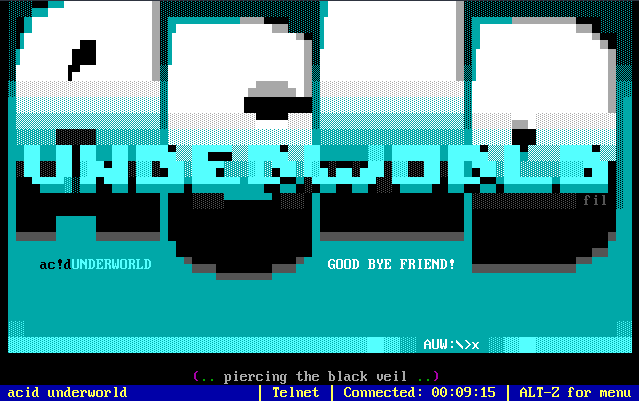